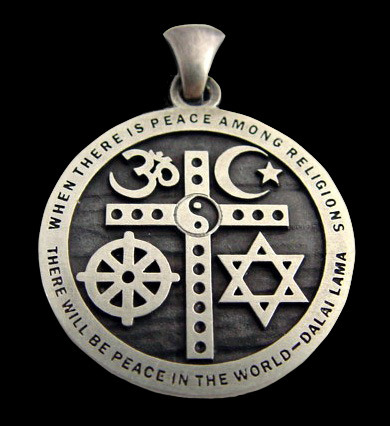 The INTERFAITH UNITY PENDANT (approximately the size of a quarter) is available in sterling silver and stainless steel. (You are purchasing the Sterling Silver Version here. Click here to see the Stainless Steel version. Scroll down the page for a Special Offer of a Free Stainless Steel pendant with the purchase of the award-winning book, The Enoch Factor: Sacred Art of Knowing God - one of two Finalists in the IndieBook Awards for “Most Inspirational Book of the Year, 2011").  Both the Sterling Silver and the Stainless Steel pendants are beautiful as well as durable, but this Sterling Silver version, as you would expect, is the most stunning in beauty.  The pendant is to be worn to promote a more conscious, compassionate, and charitable world, especially among the great religions of the world.  As the Dalai Lama has often said, "When there is peace among the religions, there will be peace in the world." This quotation/affirmation is engraved around the outer edges of the pendant.

•  At the center of the Interfaith Unity Pendant is the symbol of the Christian cross representing Christianity. Christianity is the largest of the world religions with more than 2.2 billion followers. While the cross was known to the early followers of Jesus, it was not widely used until approximately the 5th century. The creator of this pendant places the cross at the center to acknowledge the centrality of the Christian faith in his own life. As a devoted follower of Jesus and the teachings of Jesus as a way of life and as a way of knowing God, he wears the pendant to express his gratitude for the transformative power of Divine grace--grace which has transformed how he views his life, his role in the world, and his understanding of reality and the human experience. By following the teachings of Jesus, he is becoming a more conscious, compassionate, and charitable person.

•  Where the Christian cross intersects in the Interfaith Unity Pendant, you observe the familiar Yin/Yang symbol of Taoism. Taoism is an eastern religion with perhaps 225 million followers.  While more accurately referred to as a philosophy, books on world religions almost always refer to it as a religion. The symbol itself represents the "dance of opposites" within the universe. There is daylight and dark, morning and evening, birth and death, and so forth. While everything may seem, however, to be an amalgamation of polar opposites, the reality is that all things are interconnected and interdependent. In the west, many mistakenly think this polarity refers to good and evil. But to the Taoist, good/bad distinctions are overlooked in preference for the idea of balance...harmony...unity. One for all; all for one is closer to the idea. Everything is needed for wholeness to be possible. Light is not possible without darkness and vice versa. What's soft needs what's hard to be recognized. Hot meets cold just as birth meets death. When one aspect of life outweighs the other, there is disharmony, or the absence of peace. By seeking balance in life, one becomes whole.

•  The symbol at the top left of the Interfaith Unity Pendant is that of Hinduism, the oldest and third largest religion in the world, after that of Christianity and Islam, with nearly one billion followers.  Unlike Buddhism, Christianity, Islam, and Judaism, Hinduism does not have a single recognized founder. While widely regarded as a religion, it is really much more like a a way of thinking and living, much like the spirituality of Native Americans. Given the age of Hinduism, there are many, many variations as well as much freedom of belief among its practitioners. For example, in India, where Hinduism is believed to have originated, there is perhaps more religious diversity than in any other country of the world. While many symbols are used in Hinduism and there is no one symbol for this faith tradition, the symbol in the pendant is the most widely recognized one for Hinduism. It is Om or Aum, representing Brahman--the impersonal Absolute, the source of all that is manifest, as well as unmanifest, and is incomprehensible. It is that which pervades all of life, which is why Hindus begin their day making the sound of Om. 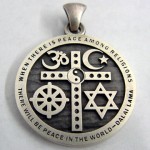 •  The symbol at the bottom left of the Interfaith Unity Pendant is that of Buddhism, or the Wheel of Dharma (sometimes referred to as the Wheel of Law).  Buddhism is a path of inquiry and self-transformation based primarily on the teachings of Siddhartha Gautama, commonly known as The Buddha (or, Enlightened One). Buddha lived between the 6th and 4th centuries BCE and is highly regarded as an awakened teacher. The Buddha's purpose for teaching the Dharma, the Universal Law, or simply "Truth," was to help others end dukkha or suffering caused through self-grasping. The goal of this teaching was to reach nirvana--the supreme state of awakening and knowledge--and arrest the causes of cyclic existence--birth, death, and rebirth, known as samsara. Samsara has been translated variously but it basically refers to endless suffering, cyclic existence, or continual wandering. So, in Buddhism, the goal of human existence is to apply the Dharma in the form of the Eight-fold Noble Path of ethics, philosophy, and meditation to eliminate self-grasping and become enlightened--become a buddha. The Buddha taught that our self-grasping was due to an ignorance of the causes of suffering and the path away from it. According to the Buddha, therefore, the cycle of suffering could be overcome by understanding what he called the Four Noble Truths--symbolized by four small spokes outside the wheel--and by following the Eight-fold Path--symbolized by the eight inner-spokes of the wheel.

•  The symbol at the top right of the Interfaith Unity Pendant is that of Islam.  Like Christianity and Judaism, Islam is a monotheistic religion - belief in one God. Islam is the fastest growing religion in the world, already making up about one-fourth of the world's population. Most social scientists believe that, within the next few years, the Islamic population will exceed that of Christianity. Most Muslims belong to one of two denominations - the Sunnis (80% to 90%) and the Shia (10% to 20%) and Muhammad is regarded as its founder. The word Islam means "submission to God." The symbol in the pendant is that of a crescent moon and star, the internationally-recognized symbol of Islam.  It is widely speculated that the crescent moon dates back to the period known as the Ottoman Empire, when the Turks conquered Constantinople in 1453 and the Ottoman Empire ruled over the Muslim world. Further, many say that the five points of the star refer to the Five Pillars of Islam--the Testimony of Faith, Prayer, Almsgiving, Fasting, and Pilgrimage. While some mistakenly think of Islam as a radical faith, Muslims consider their faith to be moderate, so to speak. For example, Muslims seek to strike a balance between devotion to God and enjoyment of this world. A devout Muslim would not live his/her life in disregard of God but neither would he/she neglect the world and be completely devoted to worship or prayer. Balance is the key for the devoted follower of Islam.

•  The symbol at the bottom right of the Interfaith Unity Pendant is that of Judaism. The oldest of the monotheistic religions, Judaism is the faith of the Jewish people. Their history of survival is in-and-of-itself truly remarkable. While comprising less than one percent of the world's population, they exert enormous political influence and command a great deal of attention worldwide. About half the Jewish population resides in Israel; the other half in the United States and a small percentage of Jews live in Europe. The Star of David is highly regarded as that symbol of the Jewish faith and people. Similar to Islam, the basis of Jewish faith and tradition is the Torah, known as the Pentateuch or the first five books of the Old Testament, also known as the Books of Moses--Genesis, Exodus, Leviticus, Numbers, and Deuteronomy.  The shape of the symbol, a hexagram, is known to many Jews as referring to the Shield of David but its significance as a religious symbol is not widely recognized. Throughout the centuries, many ideas have circulated as to the meaning of the six-pointed star. About the most that can be said is that the six-points represent God's absolute rule over the universe in all directions. This truth would have brought comfort to the Jews during their many years of suffering as a people.

The Interfaith Unity Pendant is to be worn to promote peace, harmony, and the oneness of all spiritual traditions. Each tradition is valid and holds special significance to its followers.  Yet, each tradition must respect, value, and so make room for all other traditions.  In the end, all spiritual traditions provide Light and Truth to the world and seek to hold sacred the Mystery of Life. "Where there's peace among religions, there will be peace in the world" (Dalai Lama).

The pendant is approximately the size of a U.S. quarter. It is not silver plated but silver.