What is TRUE Spirituality?… 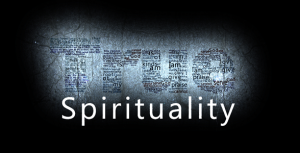 What is TRUE Spirituality?

For much of my Christian life, I confessed Jesus and so pursued some kind of spiritual life. It was not because I was all that interested in overcoming the self-centeredness that WAS my life…my up and down emotional states…my negative thinking about others…my pursuits, interests, and ambitions, virtually all of which were all about my hopes and dreams. The fact is, my life was pretty much about ME.

I largely pursued spirituality for what I felt were its beneficial outcomes for me, especially the one about escaping hell and making heaven.

What I did not know in those days is that I, like most people, was thoroughly controlled by my own ego – the very illusory thing Jesus sought to show us how to overcome…that very inner entity that almost all spiritual teachers tried to bring to our awareness and so enable us to overcome.

It is the ego in you that is the false self – not a “bad” self just not your best “self” or even your most “real” self. It is the self we must move beyond or else our spirituality is cheapened into some kind of insurance policy for the world to come. Or, little more than some cheap attachment or sacred substitute here.

And, why is this? Because it is the ego in you that wants to survive. The real you is eternal – most of Christian history it has been called the “soul.” But think not of the “soul” as some of invisible image of the best ego you! Which is, of course, how most of us think of the soul. Just the best part of me. So I stand in the mirror and look at my body and mistakenly think that, in death, the soul…the best mirrored image of me…is what survives.

My friend you are going to die and with it, all attachments of the ego you. And, that includes the “body” image, too.

The ego in you dies, too. Which is, of course, why it tries hard, and believe me it has been quite successful with Christians, to attach itself to the future…to get you all wrapped up in things…even “religious” things…beliefs…doctrines, none of which are evil – they are all just beautiful expressions of what we believe. But, if the ego can divert our attention away from that toward which all doctrines point so that we invest our doctrines with our imaginary hopes and illusory selves, then of course it makes sense that, when people question or challenge our doctrines, we would feel reactionary and defensive.

Such things we take personal.

Because we’re still under the illusion we ARE these beliefs…we ARE our attachments to all things spiritual, including our beliefs in heaven or hell.

But, Jesus said, “Deny yourself” (Matt. 16:24) – not “Deny yourSOUL” – the real you…the eternal you…the YOU in ONENESS with ONENESS herself. No, what he was saying is, “Detach” – that’s Buddha’s word. Jesus used “Deny.” The same pointer toward the same outcome. Just words.

Don’t get attached to words. Another ego thing. Buddha called all attachments – emptiness. He said to let go of all emptiness. Which is, of course, the illusion. All attachments are “emptiness.” How do you hold on to nothing? The ego tries, nonetheless.

Jesus described all attachments as “the laying up treasures on earth where moth doth corrupt and destroy” (Matt. 6:29). Same truth. Different pointer. If you think he was talking only about money and possessions, you’ve missed his point entirely. “You cannot serve two masters, God and mammon simultaneously” (Matt. 6:24). Mammon is any attachment.

Even an attachment to some “sacred” belief or doctrine.

What is TRUE SPIRITUALITY?

Father Richard Rohr says, “True spirituality is not a search for perfection or control or the door to the next world; it is a search for divine union now” (The Naked Now, p. 16).

This then may be the test of genuine spirituality in your own life. I cannot say this for sure. But, I might be onto something here:

The test of true spirituality is whether you are more and more interested in NOW and living with fewer and fewer attachments while, at one-and-the-same-time, less and less interested in the future that Jesus said “Take no thought of anyway” (Matt. 6:33-34) with its illusions of golden streets and jasper walls and palaces for all who’ve believed correctly…

It’s all about ME…

20 thoughts on “What is TRUE Spirituality?…”