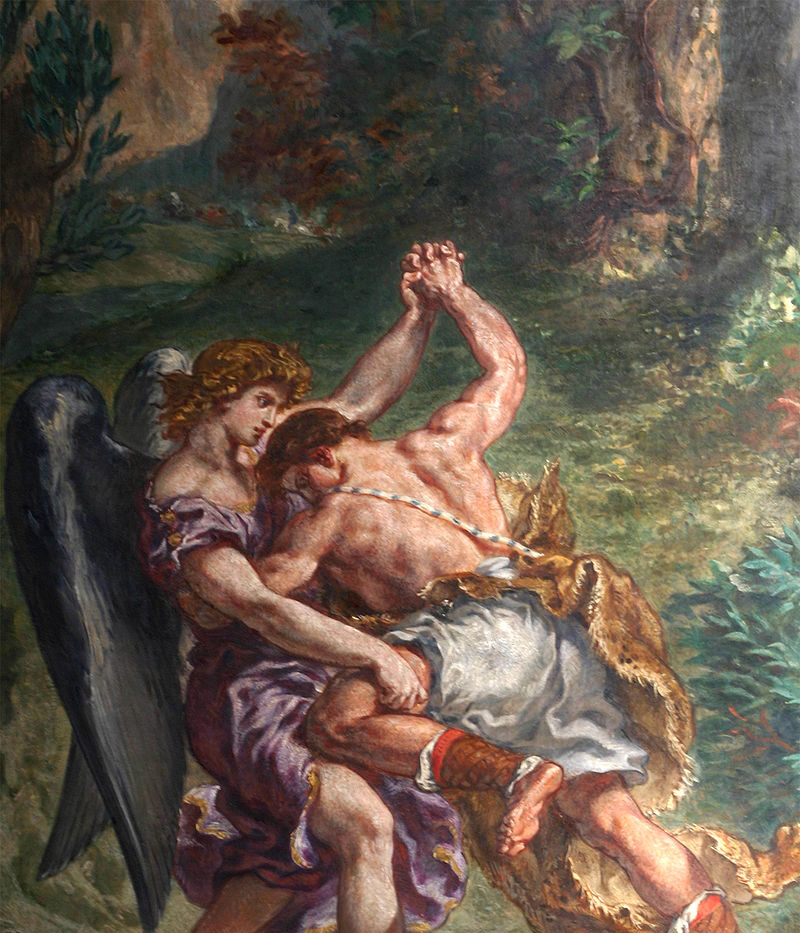 Wrestling with God: The Day God Lost a Wrestling Match

Wrestling with God.
What does this mean?

This is a Biblical myth for which I have had much fascination and attraction over the years. It is that story of Jacob who wrestled all night long with a man, an angel, or, was it God?

I suspect it doesn’t matter, though I am prone to think the latter. Why? Clearly, in the end, it is God who loses the wrestling match.

24 Then Jacob was left alone. And a man fought with him until morning. 25 When the man saw that he was not winning he touched the joint of Jacob’s thigh. And Jacob’s thigh was put out of joint while he fought with him. 26 The man said, “Let me go. For the morning has come.” But Jacob said, “I will not let you go unless you pray that good will come to me.” 27 The man asked him, “What is your name?” He said, “Jacob.” 28 And the man said, “Your name will no longer be Jacob, but Israel. For you have fought with God and with men, and have won.” 29 Then Jacob asked him, “Tell me, what is your name?” But he said, “Why is it that you ask my name?” And there he prayed that good would come to Jacob. 30 So Jacob gave the place the name of Peniel. For he said, “I have seen God face to face, and yet I am still alive.”

Wrestling with God: The Day God Lost the Wrestling Match

Isn’t that what every spiritual seeker wants?

To win? To win with God?  Not as in humiliating and defeating God, the Divine opponent. Not as in a political defeat, whereby a candidate uses cruelty, degrades the others,  capitalizes on every tactic available to underhandedly, maliciously, intentionally twist the opponent, his or her truth, and bend everything, including the opponent, to gain the advantage over the other.

We know about that kind of winning. We’ve seen a lot of it lately, haven’t we?

No, the spiritual struggle is not to humiliate and defeat the other but to prevail WITH the other. To persevere toward the other. As in…

The spiritual struggle is to ultimately know God, isn’t it? To know yourself, too? Which may be partially, if not wholly, the same.

Here’s what I have come to learn.

My spiritual life has been and is a struggle. Sometimes, that struggle is with “men,” so to speak. Some who think they’re “angels” even. When the struggle has been with “men,” as it often is, I wrestle with what they say about God, believe about God, assume they know about God.

I struggle with those “men” or, better, humans who pretend they can be so certain what they believe or what their religious traditions says is the truth is actually the truth…truth all neatly packaged and put together and complete with a bow and a card with their name personally inscribed on it.

I am not this way…

I wish it were that easy for me. As easy as opening a present at Christmas or a can of refried beans to eat with leftover tacos.

But it has never been that easy for me. I’ve tried to accept things without questioning them. I’ve tried to “just believe,” as I’ve been told by those who cannot understand why “believing” is often such a struggle for me.

Yet, this has been my spiritual experience.

I find infinitely more joy, contentment, peace and freedom living into my doubts, rather than denying them. Or, running from them.

I am infinitely stronger by the struggle itself.

I have discovered that, by wrestling with God, I am becoming more like that against which, or whom, I wrestle. Not nearly as fast as I’d like, of course. And, often, not nearly as neat or without flaw as I’d like.

But I am getting there. I am making progress.

God gets what God wants = which is me, I suppose.
I get what I want = which is God I, too, suppose.

It’s not so different with you, either.

Oh, sure, some of you who read this just wag your head in bewilderment by the oddity of my spiritual pursuit. So be it.

There are a few of you, however, who look for the stuff I write because you have learned, “This guy gets me.” You have discovered I know something you want to know.

What I am discovering is that I may know a little more than some but the more I know, the less I do.

If you’re looking for a quick “win” in your spiritual life, you’ll have to play in the religious playground where questions are discouraged and answers are easy. There are plenty of those religious playgrounds around. If you need a God wrapped in a theological package with bows and ribbons who has goodies inside for all who “just believe” you’ll have to go somewhere else…

If, on the other hand, you are a seeker like me, a fellow struggler, and you’re willing to persevere unto the end, I think I can promise you this much:

God is like the perfect father, or mother, who knows when you’re first learning to walk…you struggle to get to your feet…and, do you remember how it worked with you?

Of course you do.

Their strong hands would slip under your arms like a crutch might be placed under the arm of a disabled veteran…and, without even being aware, you lean more than you realize on those supports as you take your first steps…but, before you know it, their hands have slipped away and you stumble and cry out and they lift you up and…and…

Well, you know how the rest of that routine goes…

Then, that day comes when you get up and go running…

And, you never stop to look back and say “Thank You!”

No, you sort of think you’ve made this struggle all by yourself…

Good for you. Keep thinking that.

You’ll one day discover it doesn’t matter with God. Like the proud Eternal loser she is, she proudly stands clapping and shouting from the bleacher section…

Losers are winners, too.
Or, did I ever tell you about the story of Jesus?

1 thought on “Wrestling with God: The Day God Lost a Wrestling Match”