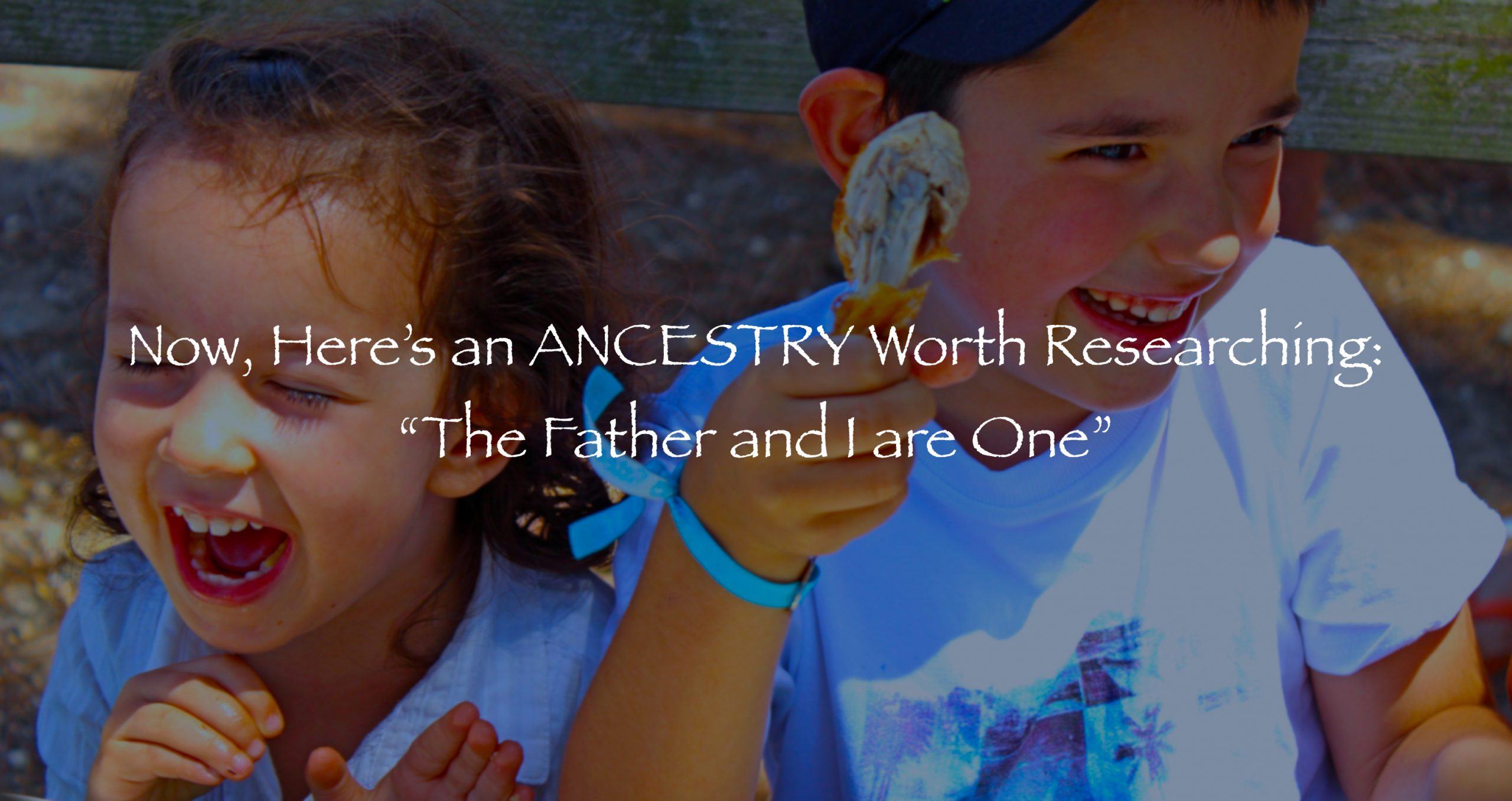 Now, Here’s an Ancestry Worth Researching: “The Father and I are One!”

February 25, 2017 Ancestry, Christian, Christianity, Identity, Spiritual Life
Morning thoughts on your real ancestry…
Your spiritual ancestry.
Try this on for size.
Your spiritual ancestry – your real ancestry is revealed in the tenth chapter of his Gospel.  John says that the people were intent on killing Jesus because he was not content with merely breaking the Sabbath, He dared to speak of God as his own Father and made himself God’s equal (see 10:30-39).

“Yes, Jesus does not back down when confronted with such hostility.
“He declares (as all of us should), ‘The Father and I are one.’
“At that point, the people fetch stones to kill him, saying, ‘You’re only a man, but you claim to be God.’
“Jesus responds by quoting Psalm 82, ‘Is it not written in your Law, ‘I have said you are gods’? So the Law used the word ‘gods’ of those to whom the word of God is addressed–and Scripture cannot be undone.”
“This is an extraordinary breakthrough. He not only claims his full identity but offers the same to ‘those to whom the word of God is addressed’ (see 10:35).
Guess who that is?
You guessed right. None other than you and me.
So, what does this mean?
Just as your spiritual brother, Jesus, was one with God, so are you and me.
Can you accept this identity? This oneness?
Many of you cannot. I understand. I resisted for a long time, too. It just seemed unnatural to NOT think of God as separate from me.
Not anymore. Somewhere…somehow…in the last few years, there has been a shift in me and, as I have researched and prayed and contemplated on my real ancestry – not that ancestry stuff you see on television – but my real spiritual identity…
I made (I’m making) some rather remarkable discoveries.
I have stopped seeking and searching for God. Why would I continue to search for what could never be found?
I have stopped feeling as if God were “up there, somewhere, out there” and mostly pissed off at the immorality in the world, as well as the corruption inside myself, too.

Your Spiritual Ancestry: Knowing Who You Really Are

I have let go of feeling I must always and forever and ever beg God to forgive me for the screw-ups of my life – oh, God, if you guys reading this only knew all the stuff I’ve pled with God for years to forgive me for doing – you’d probably never read another thing I write.
But not anymore. All that stuff, as important as it is, is unnecessary. One, “God forgive me” is enough, already. Any remorse you haul around after that…well…that’s just the little ego in you badgering you continually so you’ll go through life kicking yourself in the ass and never grow up and move on.
Are you ready for a new kind of ancestral search?
Are you ready to stop seeing yourself as separate from God?
Can you end the madness of imagining God as “up there” somewhere and recognize the profundity…even the blasphemy…in Jesus’ words that God is not “out there” but God is in here, inside you…even one with you and…yes…dare I say what Jesus said? God IS you. You, like Jesus, are “gods” incarnate in this world?
Talk about an identity! Don’t know who you are? Wake up, my friend. You’ve got an ancestry that’s “out of this world” – LITERALLY!
There IS no separation between God and you. Or, you and me. Or, us and the world.
Everything…everyone…is indeed ONE.
Now, I realize some of you reading this regard such comments as heretical. Blasphemous, even.
I understand. And, you are not alone. There was a time when I would have agreed with you. In fact, most of my adult life, as a minister, a preacher of the Gospel, and Baptist minister. Yep, I was all of those, at one time.
But then, one day, quite unexpectedly, but naturally, too, I began to read Jesus’ life and His words for myself and apart from the “conditioned” way I was “supposed” to read His words. Wow, was there a breakthrough when that happened. It took a long time to break free of “hearing” the words of Jesus through my brainwashed religious ears – for me, “Baptist” ears. That’s not to say it was all wrong. It wasn’t. Much of it was good and right on, so to speak. But just try to read the stories of the Bible free of “conditioned” ways of hearing those stories and you’ll know exactly what I’m talking about – if there’s anything most of us need saving from – it’s our conditioned religious upbringing.
So, if you’re not there yet, I understand. No judgment here. In fact, you might comfort yourself with the knowledge that you’re in a rather large company of identity-deniers. They fill pews every Sunday in many places and/or they walk streets every day, and alone mostly, and this group of self-identity-deniers goes all the way back to this very day in the life of Jesus Christ…
For, when Jesus made this audacious claim about himself and then said the same about all of those around him, and who would come after him – which of course must include you and me – they (this crowd that is…this crowd still around and often the very religious crowd) looked at him and the best they could do, was say, “Blasphemy! You are only a man and you claim to be God” (see 10:33).
You can identify with that group if you need to. You won’t be alone. I assure you.

Your Spiritual Ancestry: Knowing Who You Really Are is the Key to Happiness

As for me, however, I’m working on trusting Jesus’ words here…his self-identity…and his declaration that I have the same ancestry as he does. So, I’m practicing the art – and it isn’t easy – the art of living into this identity, as well as living up to my divine ancestry.
And, you want to know something?
It’s transforming everything.
But, mostly, it’s transforming me.
And, isn’t that the way transformation works in the world? If you look out at the world and what you see is a world badly in need of transforming, may I suggest a different look?
Look within. What you see around you is largely who you are within you.

(Adapted from the words of Fr. Richard Rohr, a fellow blasphemous heretic, who, in my own opinion, and I suspect the opinion of Jesus, in learning the art of walking with God…the art of BEING the incarnate presence of God in this world. May his tribe increase. It’s the only hope for this world. That I really believe. From his book, A Spring Within Us.).

1 thought on “Now, Here’s an Ancestry Worth Researching: “The Father and I are One!””