Steve McSwain is a warm, humorous, and engaging communicator. His talks and books, as well as his blogs at 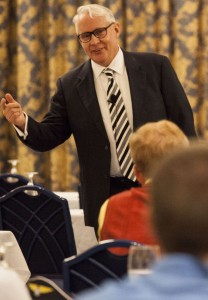 the Huffington Post and BeliefNet.com, inspire people all over the world who aspire to live what Steve describes as “the transformed life.” As a professor of communication at the university level, Dr. Steve McSwain has mastered the art himself, inspiring his audiences to expand their consciousness of the sacred in all of life, to deepen their compassion toward themselves and all living things, and to release the charitable spirit that resides in the heart of everyone.

From the moment he begins his talk, Dr. Steve McSwain connects with his audiences making them feel, as one observer noted, “deeply connected to something greater and grander than life itself…as he speaks, you have this profound inner feeling that nothing could ever keep you from achieving the life of your dreams.”  Steve’s stories are personal and filled with laughter, yet abundant in wisdom. Having visited nearly every continent on planet earth before graduating high school, Steve’s remarkable childhood has deepened his insights into the human experience and heightened his awareness of peoples, cultures, and traditions from around the world. These insights richly inform his talks. “To the degree you expand your consciousness of life itself,” explains Steve McSwain, “to that degree you have enhanced, not only the quality of your life, but the quality of life itself on planet earth.”

In 2007, Dr. Steve McSwain wrote The Giving Myths: Giving then Getting the Life You’ve Always Wanted. To this day, it is still regarded by leaders from virtually every faith tradition in America as one of the most thorough and thoughtful books on charity and generosity written in the twenty-first century.

“Dr. McSwain is a powerful speaker…truly engaging, entertaining, and inspiring. I would recommend him to any organization” – Lauren Southwood, Sales Manager Butler County Visitors Bureau, Ohio

In 2011, Dr. Steve McSwain wrote The Enoch Factor: The Sacred Art of Knowing God which was named one of only two finalists in the category, “Most Inspirational Book of the Year” in the Indie Book Awards at the Global Book Expo, New York City (2011).

In this groundbreaking, sometimes controversial, but passionately engaging book, Steve McSwain explores a new kind of spirituality, one that transcends all faith traditions. “The survival of humanity is at stake,” writes McSwain. “Virtually every conflict — between nations, religions, and even between people within the same religion — has been the inevitable consequence of the narcissistic notion, ‘We’re right; You’re wrong!’ ‘We’re in; You’re out!’ ‘We’re the chosen ones; You’re not!’ Such insanity must end if humanity is to survive!” More than a personal odyssey, The Enoch Factor offers fresh insights into the teachings of Jesus, the Buddha, Lao Tzu, Muhammad, and others.

Dr. Steve McSwain is an executive coach. Each year, he counsels a select group of entrepreneurs, CEO’s, community leaders, and especially religious leaders interested in expanding their own consciousness and, as a consequence, enhancing their leadership, influence, and entrepreneurial skills.

Dr. Steve McSwain is the founder and CEO of the Foundation for Excellence in Giving, Inc. The company has assisted non-profits, faith-based organizations, and congregations with strategic counsel, vision and mission casting, executive coaching for CEO’s, board members, ministers, priests, and pastors representing virtually every religious communion in America. He and his company have conducted hundreds of feasibility studies, and annual and capital campaigns for non-profits and congregations all across America. These congregations and organizations have raised more than a half billion dollars for worthy causes world wide.

While a Christian by choice, Dr. Steve McSwain respects all spiritual traditions. In a spirit of respect similar to that of Thomas Merton, Henri Nouwen, Mother Teresa, and, most recently, even Pope Francis himself, Steve seeks to build bridges between all people and faith traditions and he speaks passionately for this inner vision of unity he holds for the future of the human family. What Mother Teresa used to say of herself, Steve now says of himself, “I love all religions, even as I’m IN LOVE with my own.”

Dr. Steve McSwain holds a doctorate in ministry and theology, describes himself as “a recovering Baptist minister,” is married to Pam and, between the two of them, they are the proud parents of four children and an ever-expanding family of beloved grandchildren.

Biography of a Lighter Nature…

9. He lives in Kentucky, home of 90-proof bourbon, baseball bats, fried chicken and cigarettes, which explains why the state motto is, “If it kills you, it was made in Kentucky!”

8. To mid-westerners, he sounds like a hillbilly from Kentucky…because he is.

7. Every year, students in his classes at the University of Kentucky give him the highest marks as a professor of communication and public speaking. But what else would you expect when, on the day of “Professor Evaluations,” he treats the students to free pizza at Papa John’s?

3. Although he admits to loving all religions, he’s managed to maintain a secret love affair with that of his own.

2. He’s spoken to audiences numbering ten thousand or more in a single setting, but get this: he’s just as boring to audiences of ten persons or less.

1. If these 9 reasons have not convinced you to hire Steve McSwain already, maybe a serious one will: Dr. Steve McSwain has something important to say about life and how to live it…about how to so live and leave a legacy that makes this world a better place for the generations that will follow. He asks, “When you leave this world – and YOU WILL leave it – how will you LEAVE IT?”

* Steve McSwain is both wise and witty. One moment, his audiences are laughing; in the next, they’re wiping back a tear, inspired and moved…

* By his real-life, heartwarming stories…wild and hilarious tales, too, of life as a minister’s kid;

* By his stories of his extensive, and sometimes, perilous travels to nearly every continent on planet earth and all before he turned eighteen years of age;

* His encounters with nearly every major religion on planet earth and the valuable lessons he learned from his extensive exposure to and studies of the faith tradtions of the world – Jews and Muslims in the Middle East; Hindus and Buddhists in the Far East, and many more.

* His life as “a minister in recovery”…that period he describes as “post-ministry-pause,” …his theory about why he’s regarded as the “Go-To” expert on changing trends in “organized religion”…why millions are leaving religion, what followers and leaders in any of them must do to reverse the trends…and, his personal take on how to nurture your soul whether inside or outside the sacred walls.

After speaking numerous times to his congregation, one of the largest in America with thousands in weekly attendance, Rev. J. Kaywell said…

“Quite simply, Steve McSwain is a miracle on stage. Not only does he have that rare ability when he speaks to inspire others to reach for the life they’ve only ever dreamed of living, but he gives every listener the satisfying sense they truly belong here on planet earth…that they are of infinite value and worth to Life itself.”