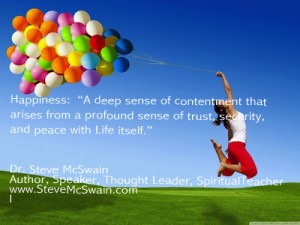 Jean-Jacques Rousseau said, “Every man wants to be happy but in order to be so he needs first to understand what happiness is.” Understand “what” happiness is? Don’t we all know “what” it is?  Maybe not. Ask people what happiness is and you’ll get as many different definitions as there are flavors of Baskin-Robbins ice cream.

How would you define happiness?

Andrew Shapter, in an article that appeared in the Huffington Post, offered “99 Definitions of Happiness.”

Really? Is there that much ambiguity surrounding happiness?

Here’s my definition of happiness:

Happiness is a deep sense of contentment that rises from a profound sense of trust, security, and peace with life itself. It is neither dependent on something pleasurable for its rising nor does it need the “right” mood for it to be evident.  Happiness is, in the words of the Buddhist monk, Matthieu Ricard, “an optimal state of being,” what Jesus described as “the abundant life.”

This happiness happens not by accident. It is the consequence of a disciplined and healthy mind (and, it is also the subject of my next book – currently being written – entitled “Why are People So Unhappy? Living Life Backwards and Discovering Happiness”).

What’s your definition of happiness?  It might just end up in the book. Share it with me and with others, would you? I’m really curious about this, as I think there is much confusion surrounding it.  What’s good, and I’ll be covering some of this in the book, science has gotten into the fray.  Since the adoption of a Positive Psychology discipline in the late 90′s within virtually every college and university Department of Psychology, some really important, as well as scientific, research has been given to the study of human happiness. In future articles, and in the book, too, I’ll be sharing some of the findings.

For example, scientists have now confirmed there are three main explanations for the level or degree of happiness you and I experience through life. I’ll address these in the next article. For now, take a minute and try writing out your definition of happiness. This is the first place to begin anyway.

So, I thank you for your contribution.