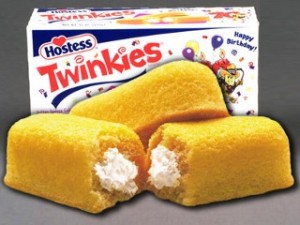 I was asked this morning by one of my Facebook friends from Australia, “Steve, what’s a Twinkie?”

At first, I thought he was joking. Who does not know, and miss, the Hostess Twinkie?

He wasn’t joking. He really wanted to know, as he had only ever heard of them but had never eaten or enjoyed one. Nor had he ever even seen one.  I sent him the picture of a Twinkie.

What simple pleasures you and I may enjoy, as well as take for granted, and all the while there are others who have no idea…they can only imagine.

All of this reminded me of those many days, even years, when I looked for the return of Christ.

Many Christians still do.

As for me, I had the charts, the plans, even the graphs. I carried them with me. I could quote scripture and verse and link both to the world events unfolding right before our eyes and just as predicted long ago. I knew Hal Lindsay’s “Late Great Planet Earth” as well as he did. Had I been a fictional writer, I could have gotten rich on a Left Behind series of books and movies long before Tim LaHaye did. Think of the warehouses of Twinkies my riches could have helped stored away before the Hostess stock tumbled and the plants all shut down.

What is it that you look for? Long for?

Still looking for a bodily return of Jesus?

After a couple of “hits and misses” with “The Rapture of Jesus” charts I used to carry around – with all its predictions..speculations…anxieties and anticipations…and, of course, its antichrists. Yes, there were plenty of those…first it was the Russian President Khrushchev, then it was our own John F. Kennedy – if you recall, he was a “Catholic” and the Protestants and suspicious Evangelicals were certain there had to be some connection between him and the Antichrist.

So then, it was Henry Kissinger – the accent gave him away.

I finally decided the charts I was carrying around were not as reliable as I thought. Besides, Hal Lindsay had been saying that a generation was forty years, or approximately forty. Further, that Jesus would return at the conclusion of that generation after Israel was re-established as a recognized state. That happened, if you recall, in 1948.

When 1988 came and went and Jesus had not returned, I decided Hal Lindsay and the Tim LaHayes knew about as much as I did about the return of Jesus.

In time, I gave up all those silly, unreliable notions I was raised to believe. Besides, I no longer need the bodily return of Jesus.

If the Eternal Christ is alive to you already, what more could you possibly need? You only look for that which you do not have.

Which is why I still, from time to time, go in a convenient store and, as I’ve done hundreds of times before, looked for the Hostess Twinkies.

Today, I can do without the Twinkies.

Just as I can do without a bodily return of Jesus.

Why would you need a Twinkie when you could carry the Hostess plant in your heart? That’s essentially the same reason why the Samaritan Woman at the Well (John 4) left her bucket after meeting Jesus and returned to the city without it.

Why would she do that?

Because, when you carry the Eternal Well within you, you no longer need an empty bucket.

No, my friend, I no longer feel the need to look for what has found me already?

And, when what has found me, finds you – and that’s one certainty I think you can count on – you’ll know what I mean. It will all be clear then. Which is why, when it finally dawned on Rob Bell, he had no choice but to write and say, “In the end, my friends, LOVE WINS.”

Meanwhile, if you need to pray for the return of anything?…

Pray for the return of the Hostess Twinkie.

Happiness…
What is TRUE Spirituality?…