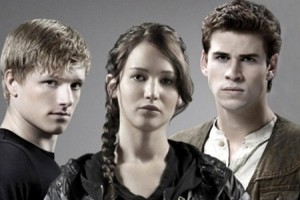 As with most great movies, there are many parallels to our shared experience as human beings in the most recent blockbuster, “The Hunger Games.”

I loved this movie. And now, I must read the books.

In one of the film’s many memorable scenes, Peeta Mellark (Josh Hutcherson), co-star who is in love with Katniss Everdeen (Jennifer Lawrence) and who survives with her the perils of the games, discuss the most likely outcome to the games on the night before they begin.

Peeta says to Katniss, “If I’m going to die, I want to still be me.”

When you die, that is precisely how you will. As yourself.

If death accomplishes anything, it succeeds in bringing an end to the illusions of who you and I really are. There’s a sense in which, for example, Saint Paul missed it, when he likened death to “the last enemy.” Death is an enemy and one could argue it is the last enemy. But death is only an enemy to the illusions. Hence, death is is only ever an enemy to the ego in you. It could never be your enemy.

What is ego? Your make-believe self, social mask, or you might think of it as the “false” self –the “you” that isn’t really you but the “you,” you mistakenly think is you.

You are not, however, the image you see in a mirror — what Albert Einstein described as “the optical illusion in consciousness.” If you have read “The Enoch Factor,” you know I discuss all of this at length in the book.

The image you see in a mirror is dying and one day will disappear altogether. It takes no “hunger games” to achieve this. Death is your intended destiny.

Furthermore, you are not the voice in your head — the thoughts you think, conditioned mostly by your upbringing. They, too, will die. And yet, isn’t it interesting, that virtually everyone mistakenly thinks that they are their thoughts?

You are not your name, title, career, achievements and so forth. None of these survive death either. In other words, that which we typically regard as real is really an illusion. What we take so seriously survives but briefly. This is why the Buddha said of life, and all its trappings, “Nothing is permanent.” Viktor Frankl said, “The meaning of life must be understood in terms of its temporality.”

So, what, if anything, survives death?

You, of course. That is, the real you — or, deeper you: the you beneath, behind and beyond form, the body, the thoughts, as well as titles and accomplishments, so easily confused with who you are. As long as you are attached to any of these transitory illusions, you will live in fear of death. Death will be to you, as Saint Paul put it, “the last enemy,” or the cosmic hunger game that gobbles up all memory of you.

So I would say to Peeta, and to you, it is not a question of “If I am going to die.” You will die. Nor is it a question of “Will I still be me?” The gift from death itself is the gift of being yourself. Rather than stealing life from you, death is the gate through which you enter into life. Which is, of course, why Muhammad said, “Die before you die,” meaning, “Why wait till you die to begin living?” Or, in the words of Jesus, “Deny yourself,” and so, by implication, live what he described elsewhere as “the abundant life.” The Buddha described this death, or the denial of that which is not really real, as “Detachment.”

All of these spiritual teachers are pointing to the same essential reality: Until you detach from all the illusions of who you are — or, to put it another way, until you die before you die — you will die a thousand deaths. Death will always be a terrifying monster: the “last enemy,” the ultimate “hunger game.”

If you make it your spiritual practice, however, to “deny yourself,” “to detach,” to “die” to the false self, and so experience a kind of resurrection before you die, then the reality of Easter occurs all over — in you and not in some future time, but now. Furthermore, you make the wonderful discovery that there is no death. Nor is there any more fear of death.

How could there be? You are Eternal. Remember this today … every day … and so live a genuinely resurrected life. That’s infinitely more meaningful than all the talk that will take place in sanctuaries around the country about the significance of Easter. You can be Easter Now!

What could be more important than this?

If You Want to Be Happy…
God…and this Moment…